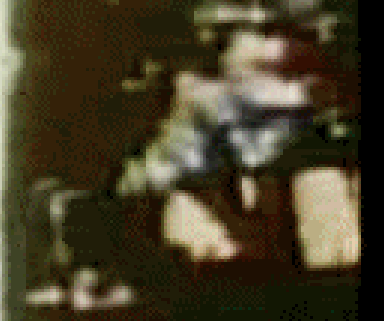 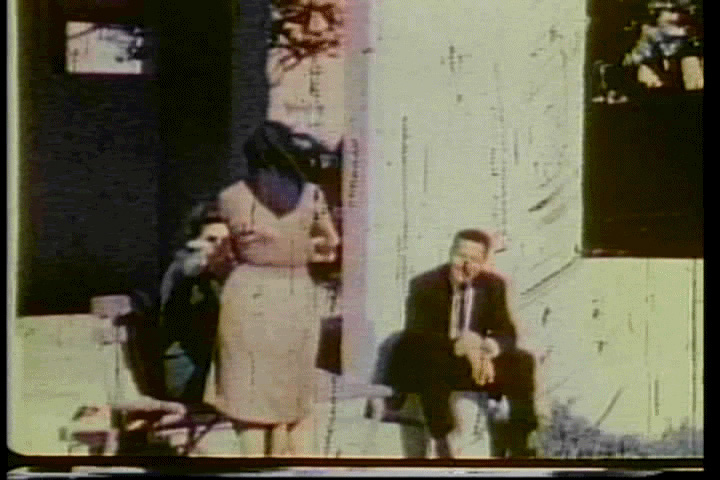 A minute or fifteen before Abraham Zapruder shot the film that would make him famous, he took a second’s worth of footage (well that’s what is available) of the Hesters sitting on the far eastern steps of Bryan Pergola. In the early frames the background at the top right contains what looks like a man. At first I thought he was heap of branches, but I ran him through Mark Turner’s sketchup model of Dealey Plaza anyway.

This took quite a while as I’d thought Zapruder was at ground level when he took this footage, but that doesn’t work. His assistant Marilyn Sitzman was quite a tall woman from what I can find. If so, her head could not have appeared below the window at the top left. So I went away and calculated the height of that window sill from other photos (the black line). I put Zapruder up on his usual perch on the plinth without Sitzman (who later had to hold onto him due to his vertigo). Alignments between the model and the photo were much improved.1

GIF animation may take a while to load fully

He could have been any passerby, but I took a closer look. The man in the background is set well back. Apart from facial features, the colours in the area are different – greys and skin tones. He is close to a car parked behind the shelter, and there are thing obscuring part of his face and his lower body. I have placed Bryce, the default sketchup guy, at various depths to try to see if mystery man is the right height to be a man at all. It starts to work when he’s placed off the kerb a few steps back into the street. For mystery man’s head to be at that height, he’s either quite short (1.6m) or he is bent down a little.

The cardboard-coloured “packages” could be branches, but there is no tree right there (one is slightly to the left), and the Yapoun trees don’t have enough girth to match. The man is moving slightly for the few frames we’re able to see him. He could be wearing a light coloured shirt and possibly overalls or a vest. He may have his right arm in front of his face.

Thinking of short people, I recalled Chauncey Holt’s 1991 confession (it’s long, so search “pickup”). He was apparently 5’4”, and had a forehead and hairline that seem to match – especially the widow’s peak. Holt said he dropped documents (including fake IDs) into a pickup in the parking lot, close to the tower. Contemporary pictures of him can be found here.

I wouldn’t stake money on it being Holt, but found it an interesting resemblance. Thoughts?

1 Researcher Jack White also came to this conclusion in 2010. Link

Secret Service agent Clint Hill quickly ran forward from the follow up car, just before the head shot at Z-313. He mounted the limousine then fell back, but managed to hold onto the rear bar (designed for agents standing on the rear running board). He recalled that if he let go and fell to the ground, he would have been run over by the follow-up car. Then followed a famous superhuman dash to get back on the limo. Analysing AntdavisonNZ’s panoramic Nix footage, his footfalls occur at the following Zapruder frames: 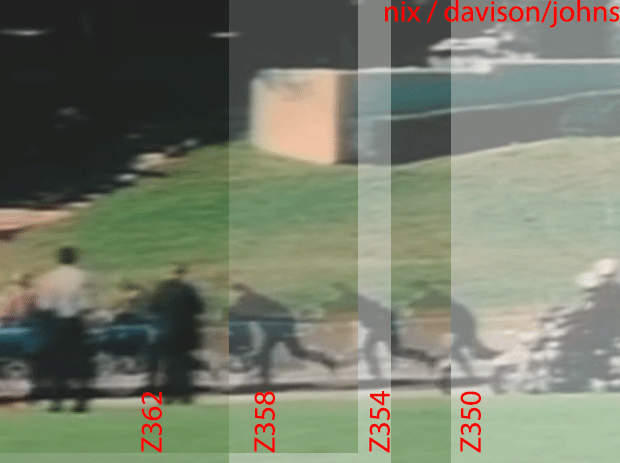 I might have the left and right legs mixed up as it’s hard to tell which is which, but that doesn’t change the number of footfalls. He manages a footfall every four frames. Nix’s camera was running at 18.5 frames per second, or one frame every 0.054 seconds. This means Hill was completing a leg swing every 0.21 seconds.

In 1998 Harvard biology student Deborah Sternlight decided to look into what limits human running speed. Long story short, it’s a human limitation – we can only swing our legs so fast…

“To Sternlight’s amazement, whether people ran fast or slow, or whether they ran uphill or downhill, everyone had approximately the same swing time at top speed. Those running 14 miles an hour and those running 27 miles an hour both took between 0.37 and 0.40 second to swing one leg in front of the other.”
Harvard Gazette April 30, 1998

It would seem that Hill’s leg swing rate is physically impossible for a human. This leaves three possibilities. Either Nix’s film rate was about 9fps (I doubt it), or he wasn’t human (I’m assured he was), or frames have been cut from the Nix film in this sequence.

The latter hunch is supported by the work of many others over the years analysing the various films as well as witness testimony stating that the limousine slowed almost to a stop during the final head shot at Z313. Hill’s fancy footwork didn’t finish until at least Z362, suggesting that the limousine ambled for at least 2.5 seconds afterward the main head shot.

Whatever the reason for the frame deletions (perhaps just embarrassment that the limo had become a sitting duck?), it means that at least half of the Nix frames from this sequence are missing. If the Nix film is missing frames, then the concurrent Zapruder film could be too, as Costella has reasoned, as part of his claim that the film has been recreated.

This post was added a few days ago to the JFK Assassination Forum. Go there for a suggestion from Gayle Nix Jackson that a contributing reason could be that the film might not have been wound correctly. So I will look at the effect of over or underwinding on frame rates and what that might mean…